Back from the Brink

Home » Blog » Science » International Programs » Back from the Brink 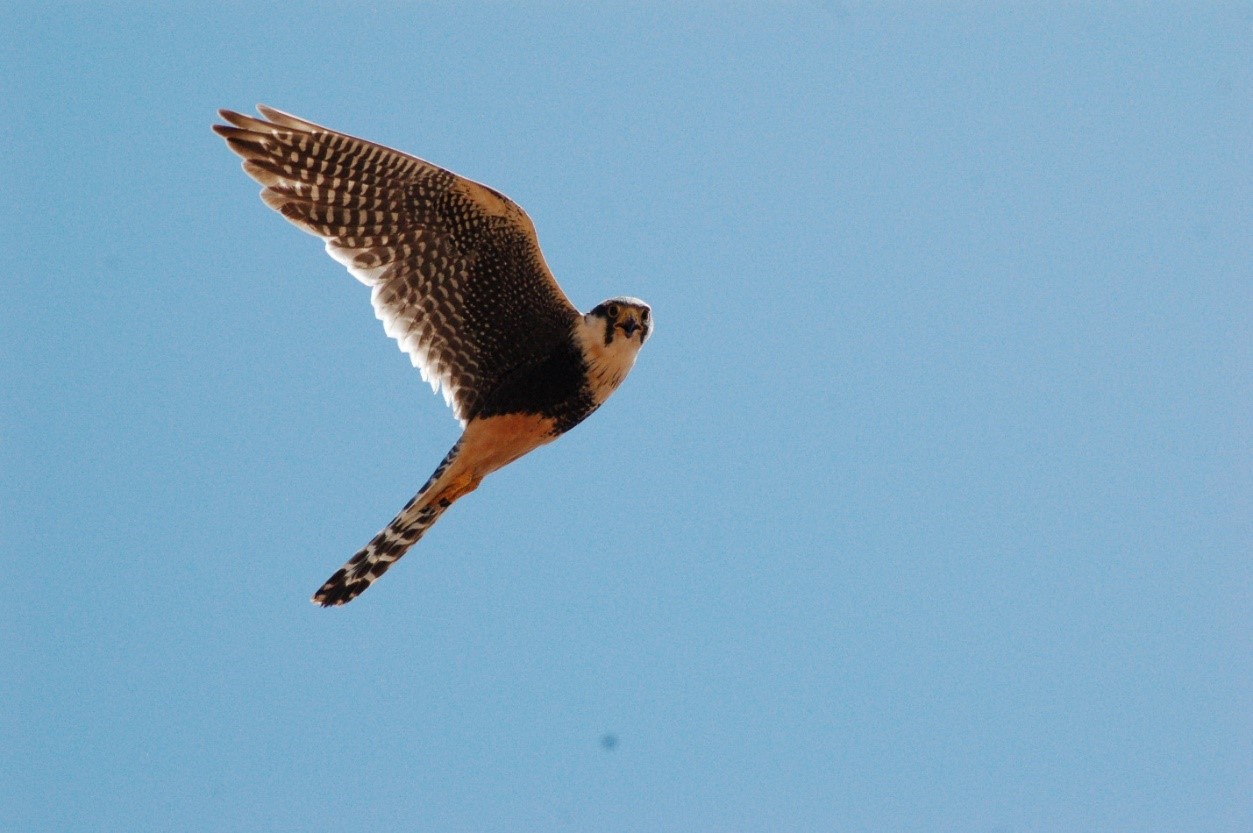 The Aplomado Falcon (Falco femoralis) is a medium-sized falcon of the Americas that was once common in the grasslands of the Chihuahuan Desert of the US, historically distributed in west Texas, southern New Mexico and southeastern Arizona.  Their populations began to decline around 1930 (Keddy-Hector 2000) and the last documented pair was recorded nesting near Deming, New Mexico, in 1952 (Ligon 1961).  The species is listed as endangered in the US and threatened in Mexico according to Mexican Law NOM-059-SEMARNAT-2010 (SEMARNAT 2010), and on the Global IUCN Red List for threatened species. 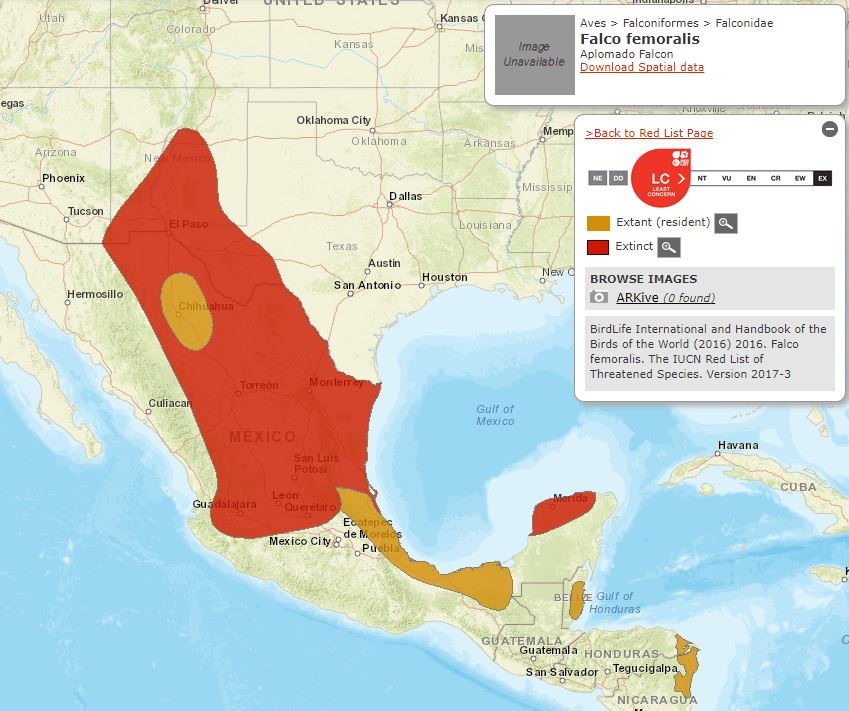 At the time of discovery, it was expected that this desert population, with adequate protection and management, would potentially colonize the former breeding range in northern Mexico and the United States.  In 2017, researchers found that 17 of 35 historic nesting territories were converted to agricultural croplands, a red flag for the survival and persistence of the species. The continuous destruction of the scarce high quality habitat for the Falcon Aplomado meant the likely disappearance of the species in the Chihuahuan Desert. 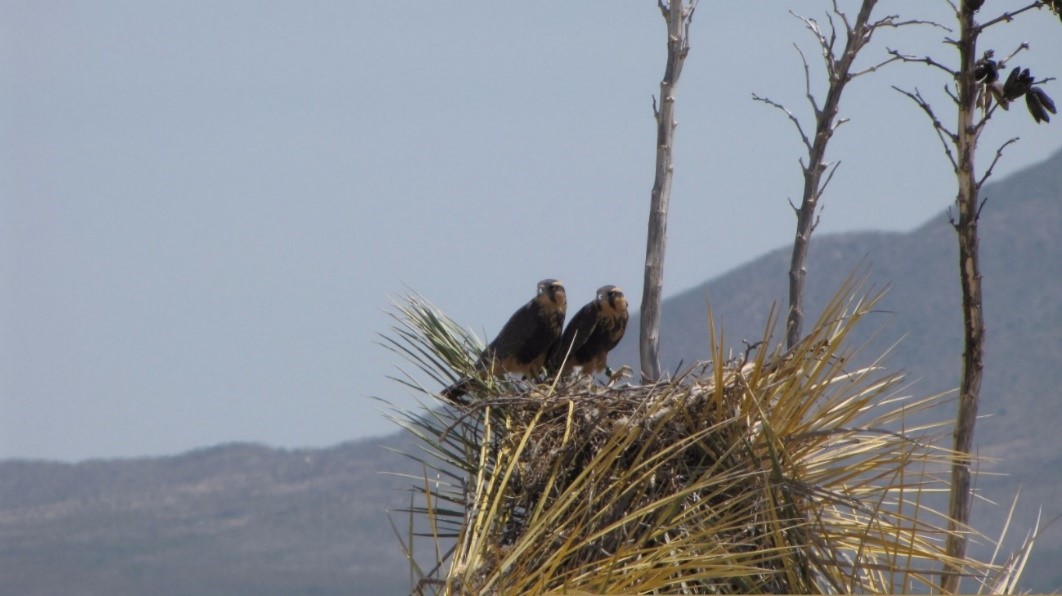 There were eight pairs of Aplomado Falcons monitored, of which seven had active nests. Of these seven pairs, five produced 15 successful fledglings. Twelve of the fledglings were banded and affixed with transmitters. 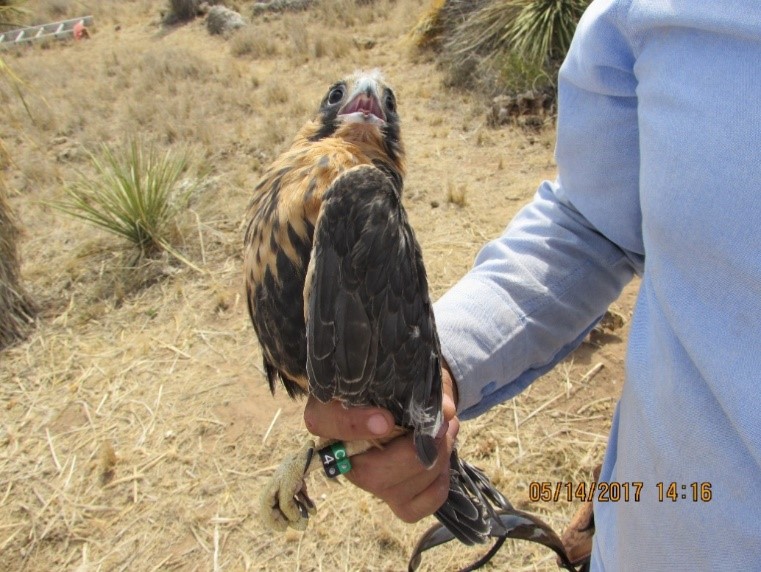 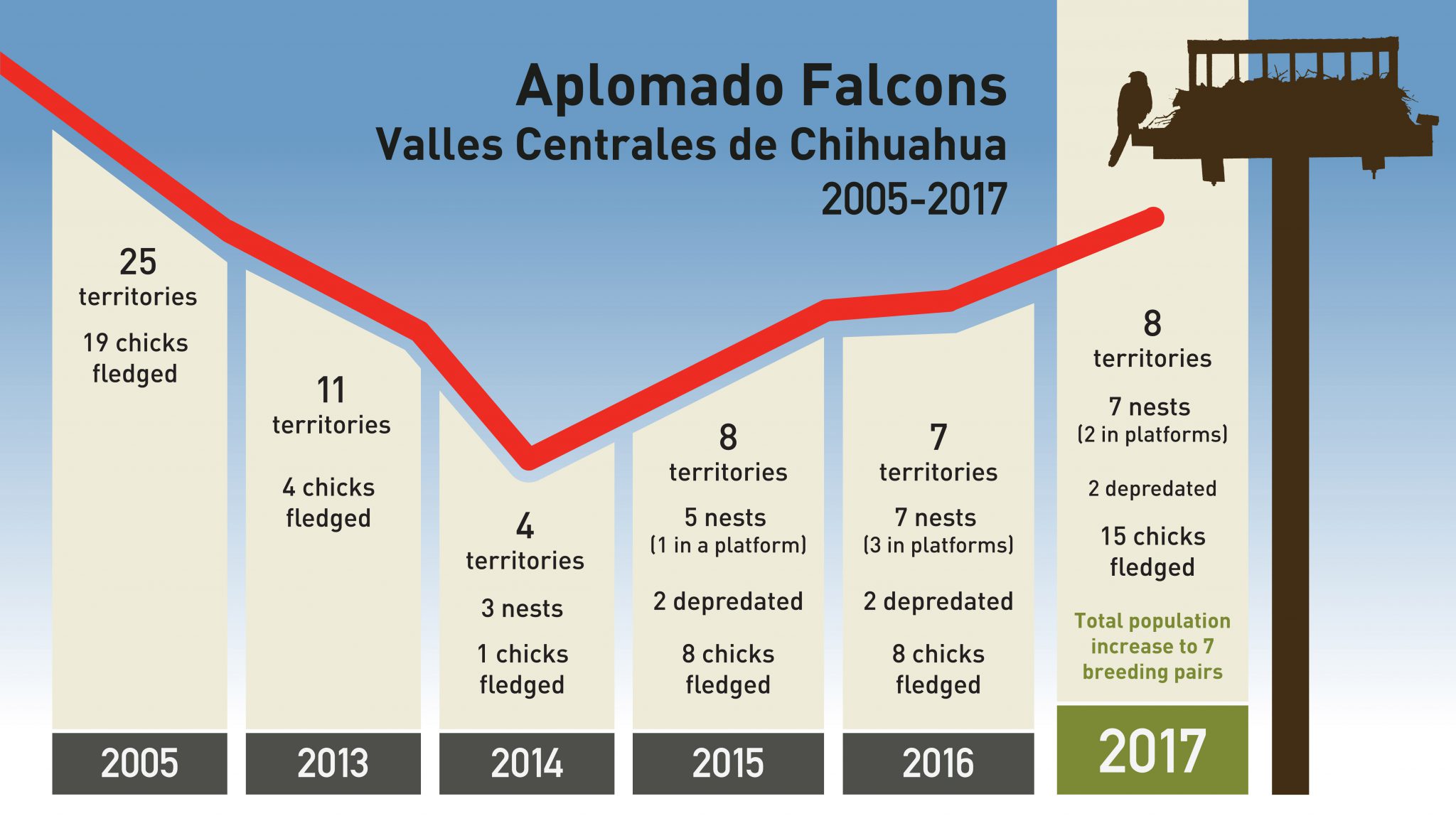 A population increase to seven breeding pairs was observed at the end of the monitoring period. Bird Conservancy, IMC Vida Silvestre and partner ranches plan to continue with the monitoring program and continue to place artificial nesting structures, because when used, they provide a good opportunity for the chicks to survive to fledgling. 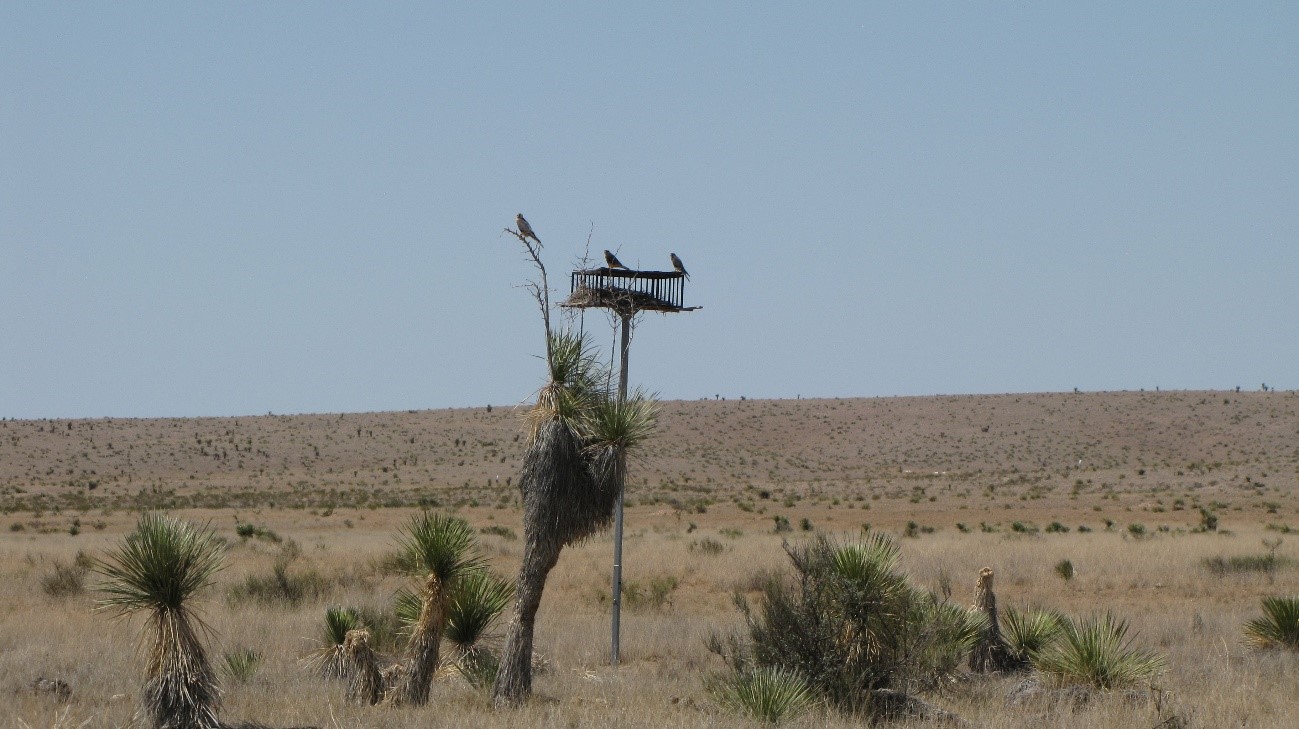 Artificial nest platforms replace the yucca they prefer to nest in that are lost to cattle and land conversion.

Bird Conservancy and IMC Vida Silvestre, along with several other partners, are currently working with landowners in the area on more than 250,000 acres to improve rangeland health and restore grassland habitat, creating a win-win for people and wildlife, including the Aplomado falcon, and discourage the rapid land-use change. 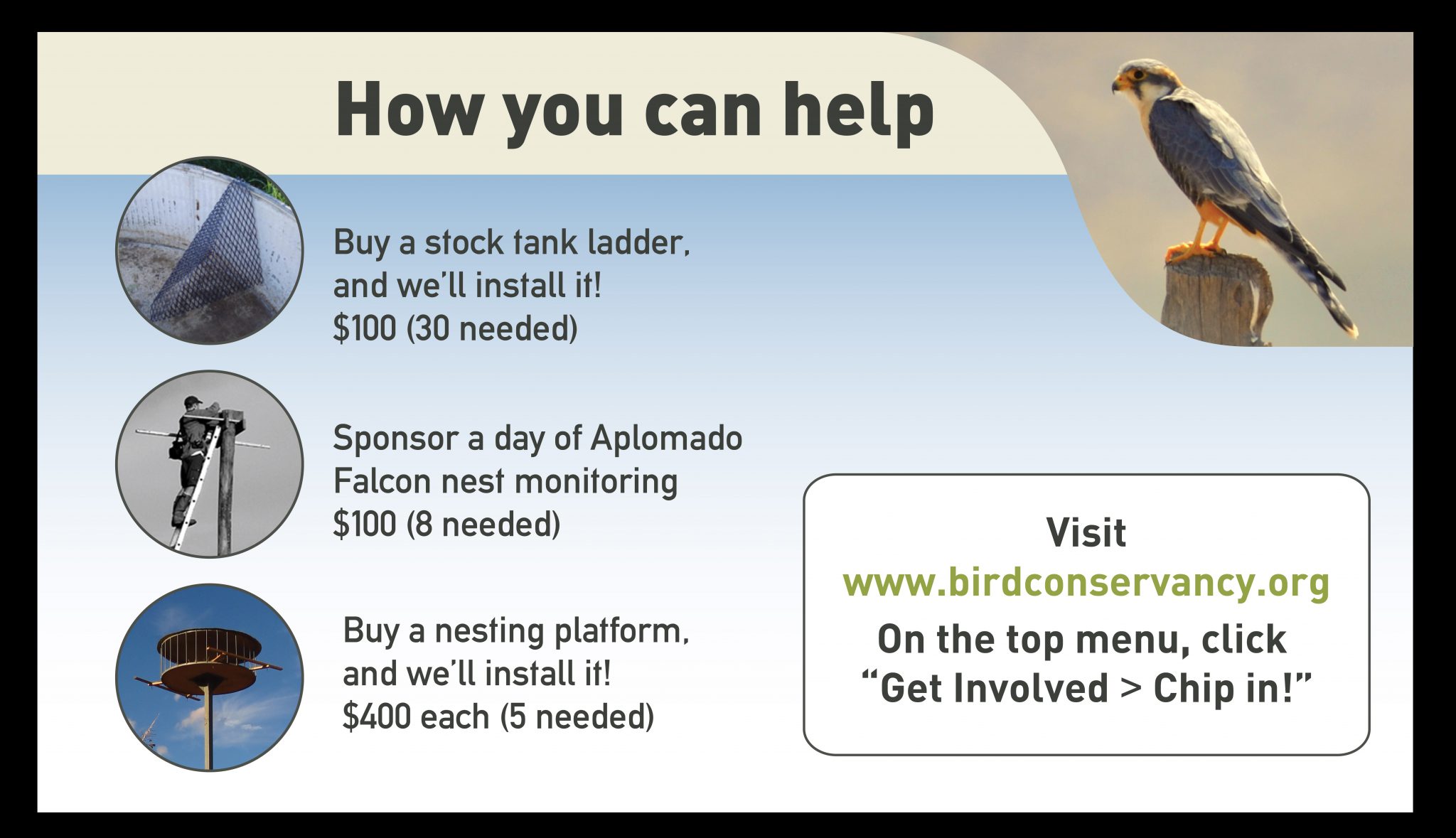