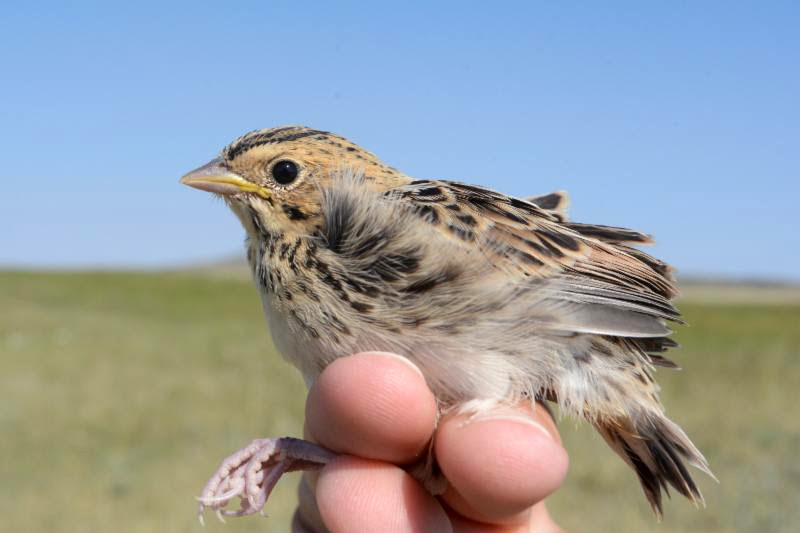 Bird Conservancy of the Rockies has confirmed that Baird’s Sparrows are actively breeding at Soapstone Prairie Natural Area, the first time the species has been documented reproducing in the State of Colorado.

After several weeks of intensive nest searching and observation, adult Baird’s Sparrows were discovered carrying food to at least three fledglings in an off-limits area of Soapstone Prairie Natural Area. The fairly young fledglings and singing males were observed in a shortgrass prairie ecosystem.

Why are they here, and what does it mean?

It’s a remarkable finding, since the enigmatic and bubbly-singing Baird’s Sparrow (Ammodramus bairdii) has never been confirmed breeding in Colorado—and the heart of their breeding range is hundreds of miles away in northeastern Montana, western North Dakota, and southern Canada. This discovery is also heartening news because it indicates that this grassland specialist species, whose population has declined roughly 77% since 1966 , has the ability to successfully colonize and nest in habitat quite far from its typical range. This ability is important as grassland areas across North America are disappearing due to conversion to agriculture, changes in grazing practices and climate change. Even so, their presence and breeding activity—so far away from typical locations—raises questions and highlights the need for additional research.
.

Finding the juveniles marked a milestone moment in an already-exciting season of bird monitoring at Soapstone which started in early spring. For four years, as part of our Mountains to Plains monitoring partnership with the City of Fort Collins Natural Areas, we have documented Baird’s Sparrows at Soapstone Prairie and Meadow Springs Ranch north of Fort Collins. This year, our teams were on a mission to catch, band and affix geolocation devices to 10 of these tiny sparrows to gather data about this new small population forming in Northern Colorado. This effort connects with Bird Conservancy’s wider research of the Full-Annual Life Cycle of grassland bird species—from “ground zero” of their breeding range in Northern Montana, North Dakota, and Canada, down to their wintering sites in the Chihuahuan desert grasslands of Northern Mexico. 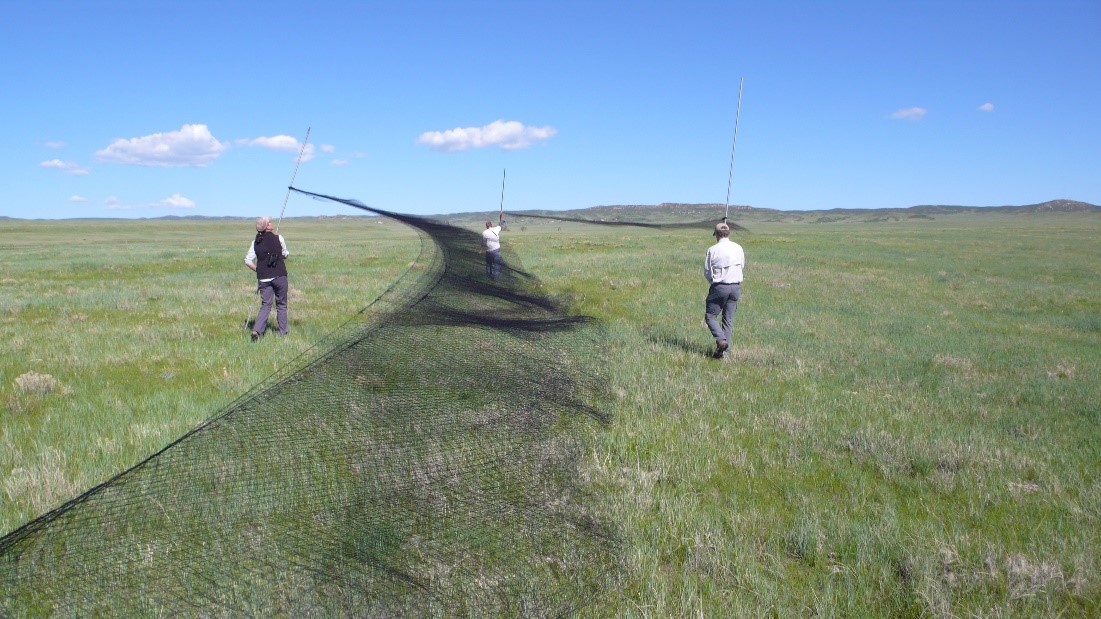 Give us your data!

Capturing and banding these birds is a bit of art and science mixed together! Teams are equipped with two nets, four poles, four sections of rebar, a mallet, a playback machine and a mobile banding station. Male Baird’s Sparrows, like most male birds singing on their territories early in the breeding season, will respond to another male singing within their territory by flying toward [him] and chasing the intruder away. Using this knowledge of their behavior, we use recorded song to lure the males into the nets where they are captured. Nets are up in the shape of a “T” with a device in the middle playing the Baird’s Sparrow song. We weren’t positive we would even catch one bird, since we didn’t know much about this new population. The method works very well for birds in the Northern Great Plains, so we were confident in our approach.

The nets set up in the “T” array, and the FoxPro playback device to play the song (listen below). Photos by William Bevil.

Left: The geolocator with the harness. Right: Our mobile banding station. Photos by William Bevil.

Success!  We caught three birds in the first hour of the day. Each bird received an aluminum USGS-issued bird band on the right leg, an orange color band (for re-sighting the bird in future years or during migration) on the left leg. We also take wing, tail, and leg measurements as well as weight. Last, we affix a new MigrateTech geolocator on his back using a figure-8 harness around the legs to fit like a tiny “backpack.” With the nice shade of the Sport Brella and the lavender hand sanitizing spritz, it was like an alien abduction/spa treatment for our little subjects. The geolocator number is recorded, and the bird is happily released back into his territory to carry out the rest of the breeding season. 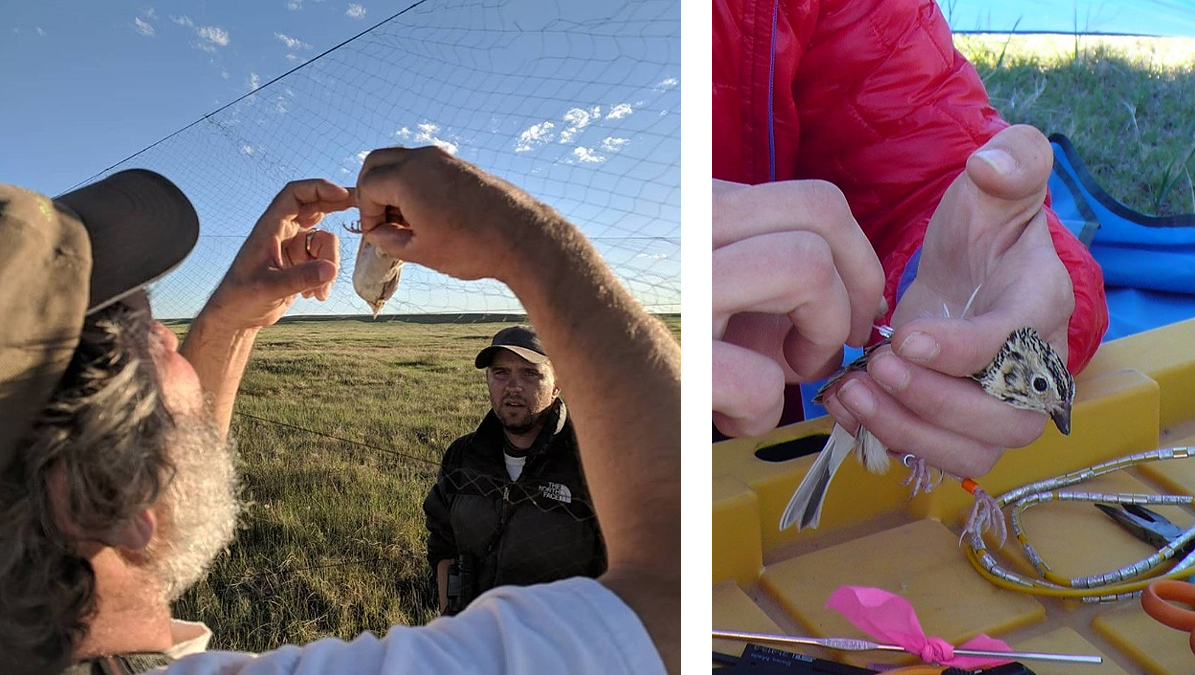 Left: Arvind Panjabi removes the 10th Baird’s sparrow from the net, while Andy Bankert looks on. Photo by Erin Youngberg. Right: Erin Strasser fitting a geolocator on a bird (see the color band on the left leg?). Photo by William Bevil. 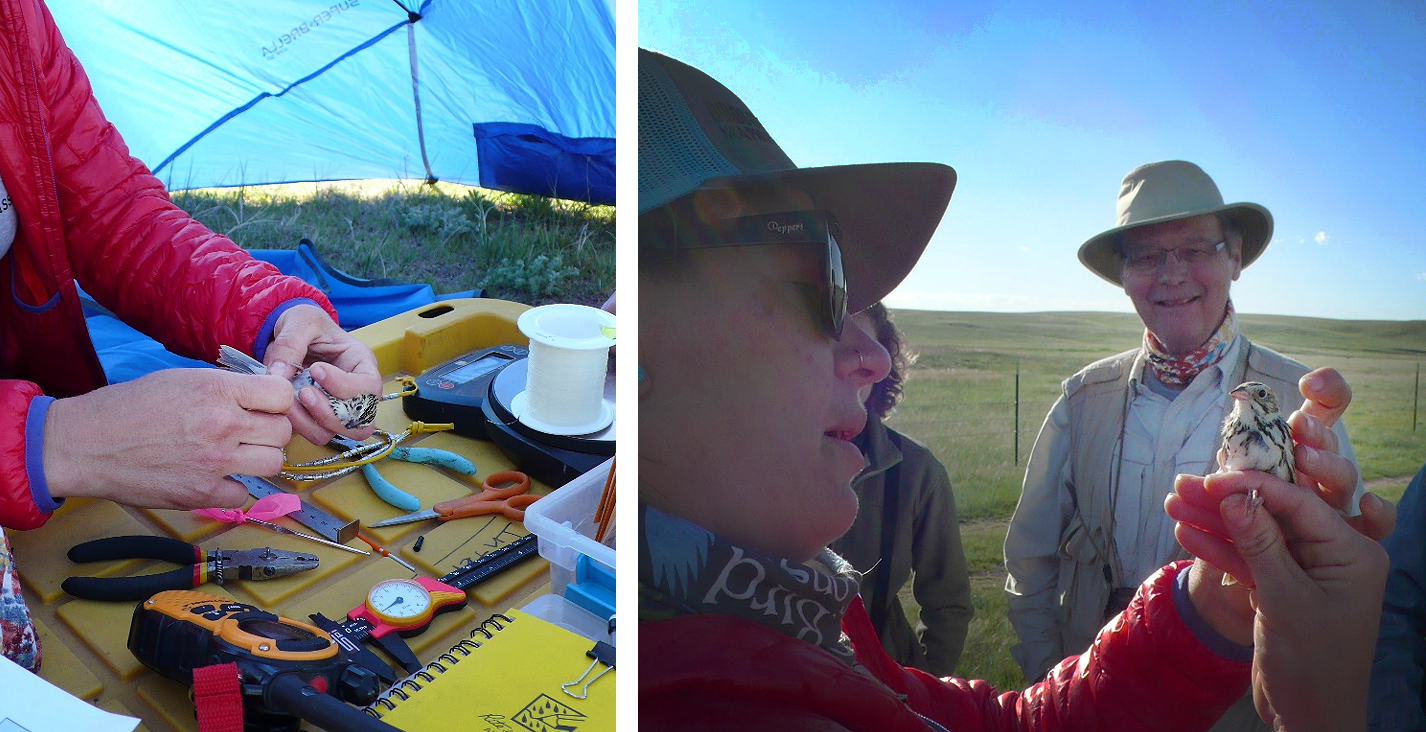 Left: A Baird’s sparrow getting banded and measured at the mobile banding station. Right: Bird Conservancy Friend Dave Driscoll admires a Baird’s sparrow in the hand. Photos by William Bevil.

After a mere five hours in the field, we managed to catch and deploy all 10 geolocators! We are excited to learn more about these individuals and where they migrate and spend the winter. The trick is that these same 10 birds need to be re-captured next year, their geolocator “backpacks” removed, and plugged into the software that will map out their movements for us to see. The fact they have returned to nearly the exact same locations for the past four years means there is great potential for re-capturing them. The discovery that they are nesting and reproducing further suggests they will return, keying into the great native grassland habitat that Soapstone Prairie provides. What a fun time to be a bird scientist! 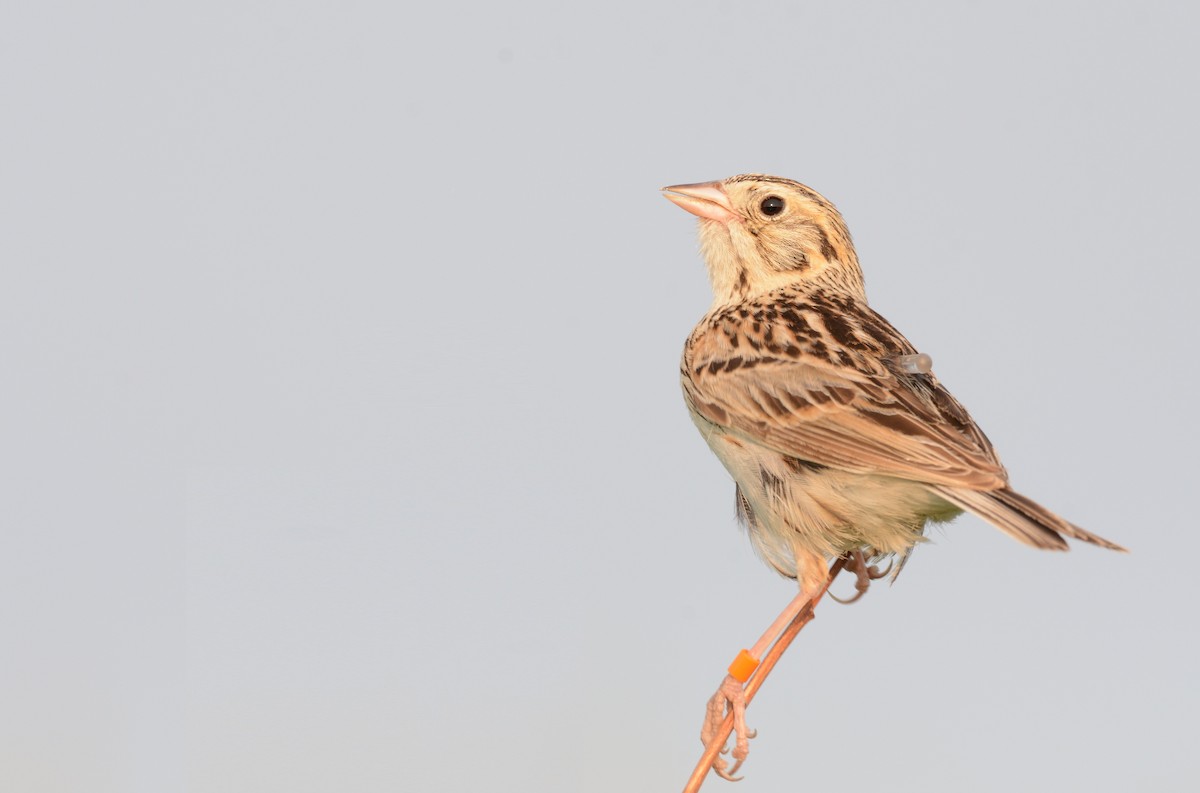 This handsome guy is one of the ten Baird’s Sparrows we managed to capture in our mist nets this season. Note the color band on his leg and tiny geolocator (barely visible!) on his back. We hope to recapture this bird again next year to learn where he’s been. Photo by Andy Bankert.

The discovery is a tribute to the ecological management of Soapstone Prairie by City of Fort Collins Natural Areas Department and many local grazing associations, which have committed to grassland conservation. Baird’s Sparrows breeding here is evidence that the goal of maintaining healthy, intact grassland areas is being achieved. Baird’s and many other grassland birds prefer taller native vegetation, which also fosters a productive landscape for cattle and other wildlife.

Recreational birders often describe Baird’s as elusive, and their nests are notoriously difficult to spot. When intruded upon, females stay close to the nest and will hunker down as long as possible before moving away. Bird Conservancy is fortunate to have a talented team of grassland bird experts to lead this challenging work. Confirming their reproduction took many hours of dedicated observation, literature review of behaviors to look for, conversations with experts in the field, and extraordinary patience on the part of Andy Bankert— who has put his skills to good use at Bird Conservancy as an avian technician on-and-off since 2009.

Thanks to our partners, the City of Fort Collins Natural Areas, the U.S. Fish & Wildlife Service, Colorado Parks and Wildlife, and the generous donors who have made this research – and discovery – possible!

Thank You to our Friends!

In May, a small group of Friends of Bird Conservancy joined us in the field at Soapstone Prairie for a firsthand look at science in action. Our Friends program encourages and recognizes major donations that support our work to conserve birds and their habitats for present and future generations. Private contributions from supporters like YOU make our mission of conserving birds and their habitats possible! We thank you for your support which makes the discovery, learning and inspiration happen—and look forward to accomplishing many more migratory milestones with you in the years to come!  Contact us to become a Friend today! 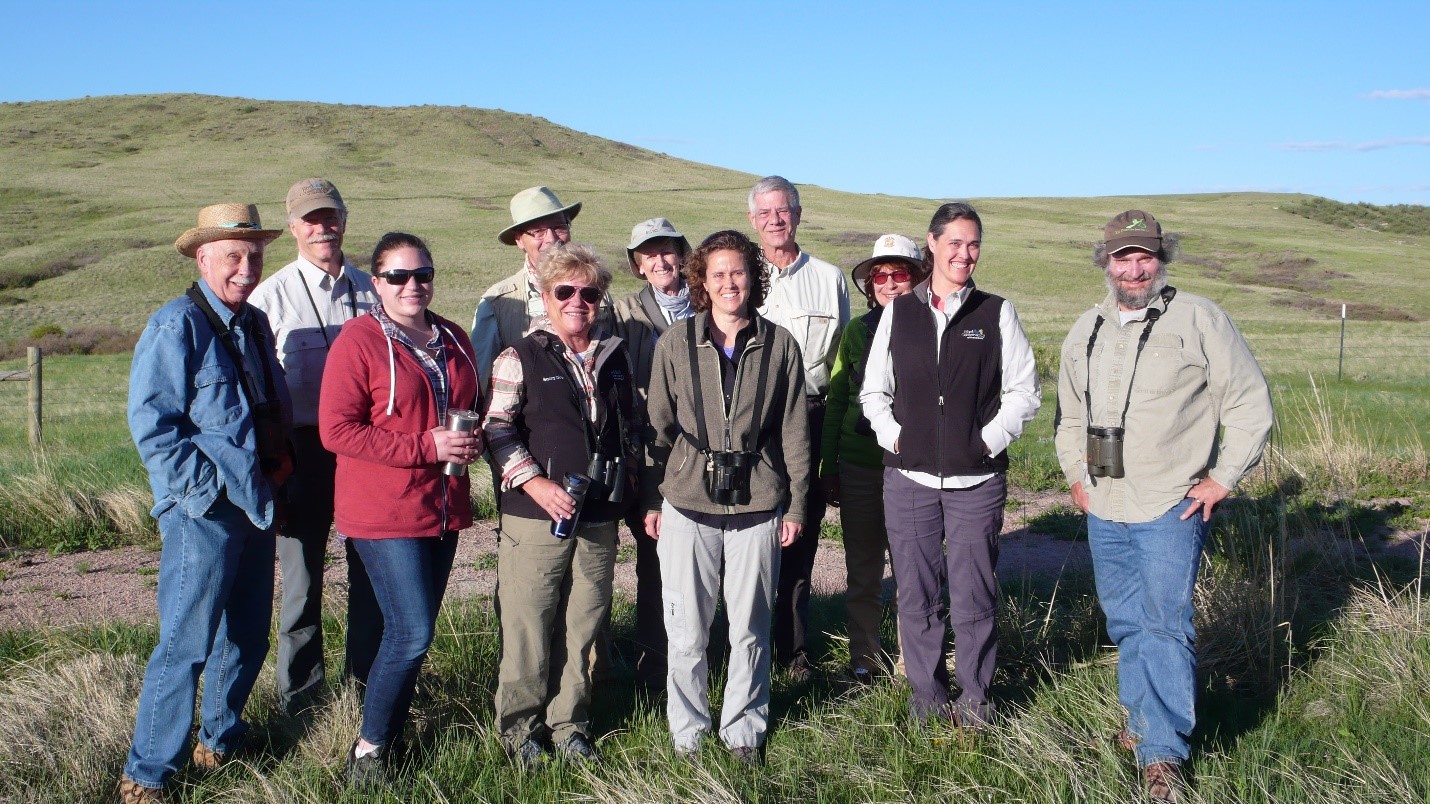 Soapstone is extraordinary with over 28 square miles of wide open vistas, nearly pristine grasslands, miles of trails and world-renowned cultural resources. It is truly a place to treasure! Visit Soapstone Prairie to meet the past, enjoy the present and preserve the future.

Birders wishing to see or hear Baird’s Sparrows can try looking for them by parking at Soapstone Prairie Natural Area’s South Parking Lot then taking the southern portion of the Pronghorn Trail. At the Pronghorn/Plover junction, head south to an area of taller grass.

Soapstone Prairie Natural Area is an on-trail only site. The Baird’s Sparrow nests and juveniles are in a conservation area that is not accessible to the public. Visitors are reminded that trails are regularly patrolled and visitors must observe all natural area regulations.

Visit the Fort Collins Natural Areas website for hours, directions and other details.