One Continent of People and Birds 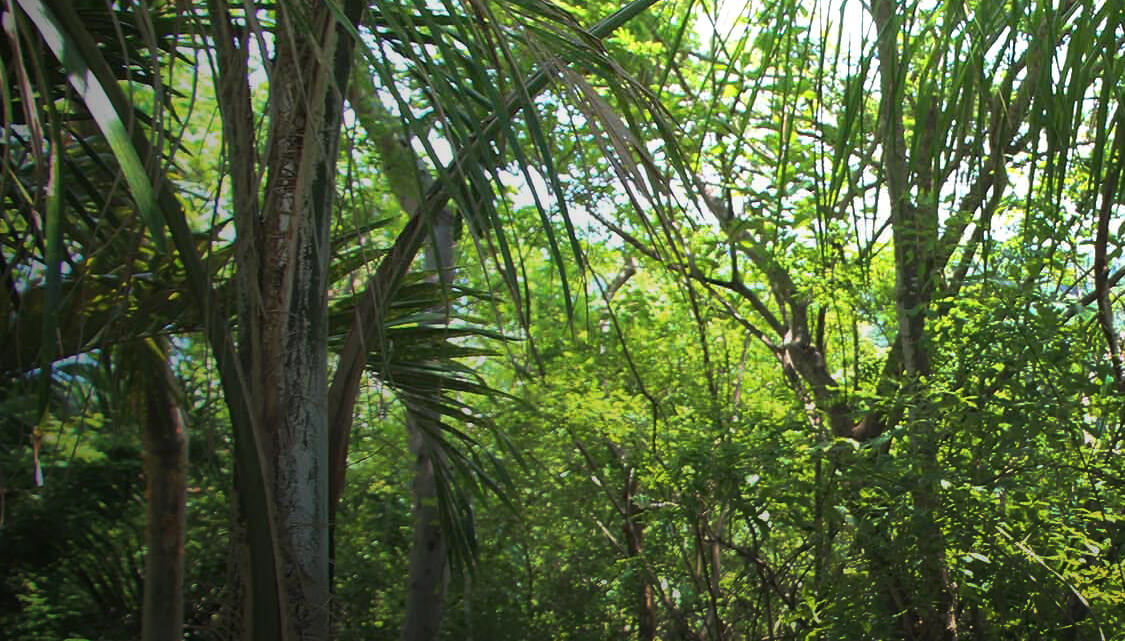 “Do you hear that? Something large is rustling the leaves.”

We train our binoculars into the dark understory of this semi-deciduous tropical forest, laden with rare, native palms in the overstory, looking for movement. It’s late afternoon and the sun is sinking low behind the hills, glaring at us through the treetops and making it all that much more difficult to see into the dark understory. A leaf sails across our field of view and the perpetrator is quickly identified…it’s a Groove-billed Ani! Huh, that’s weird. What’s this open-country bird doing in the forest? I search around in the darkness with my binoculars, looking for any further clues, hoping my hunch is right. Sure enough, I soon spot the telltale sign that there are likely more birds afoot…army ants crawling up the trees and vines, scouring any and all surfaces in search of insects, whom they quickly and mercilessly dismember and carry home to their queen. 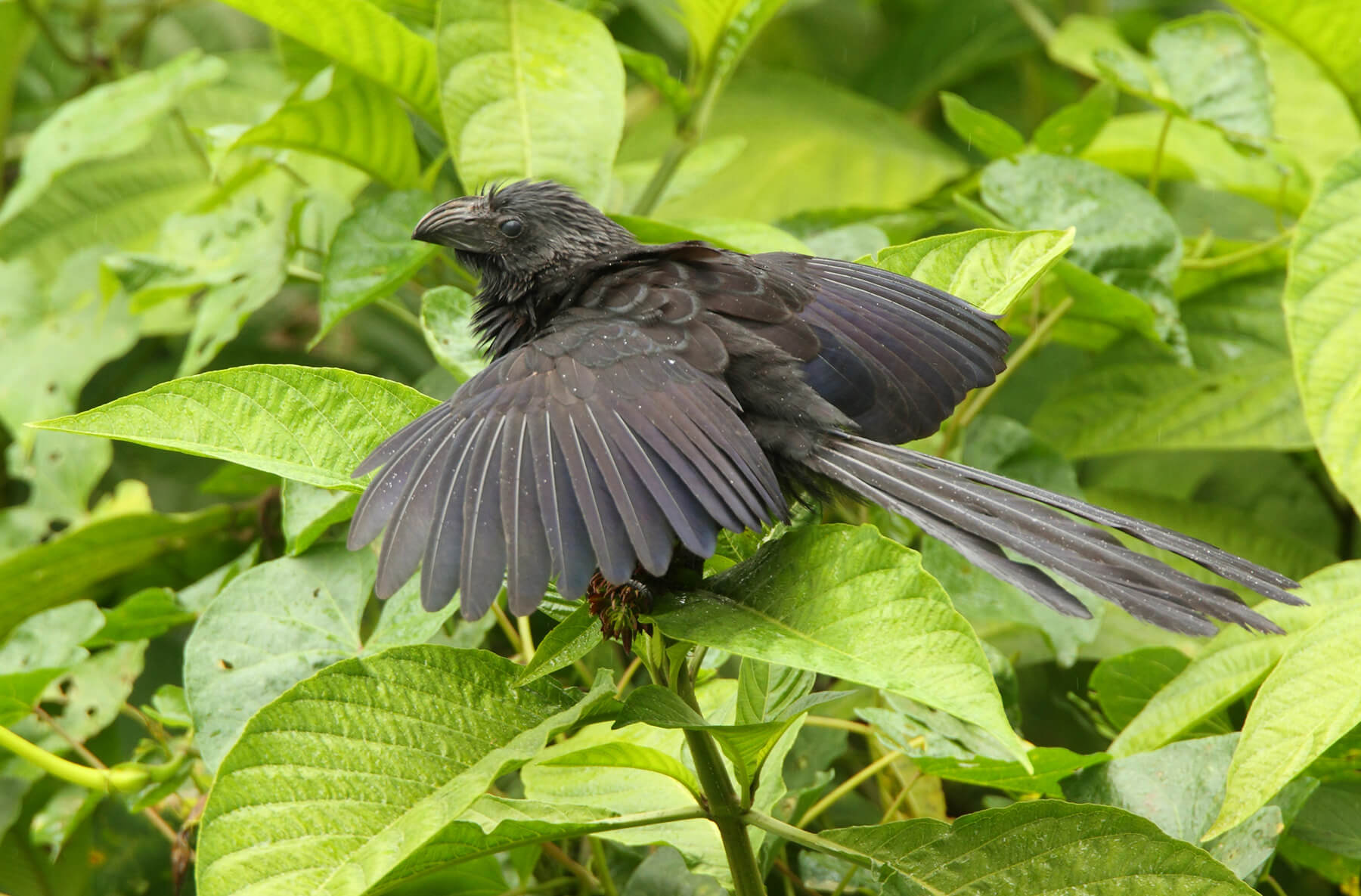 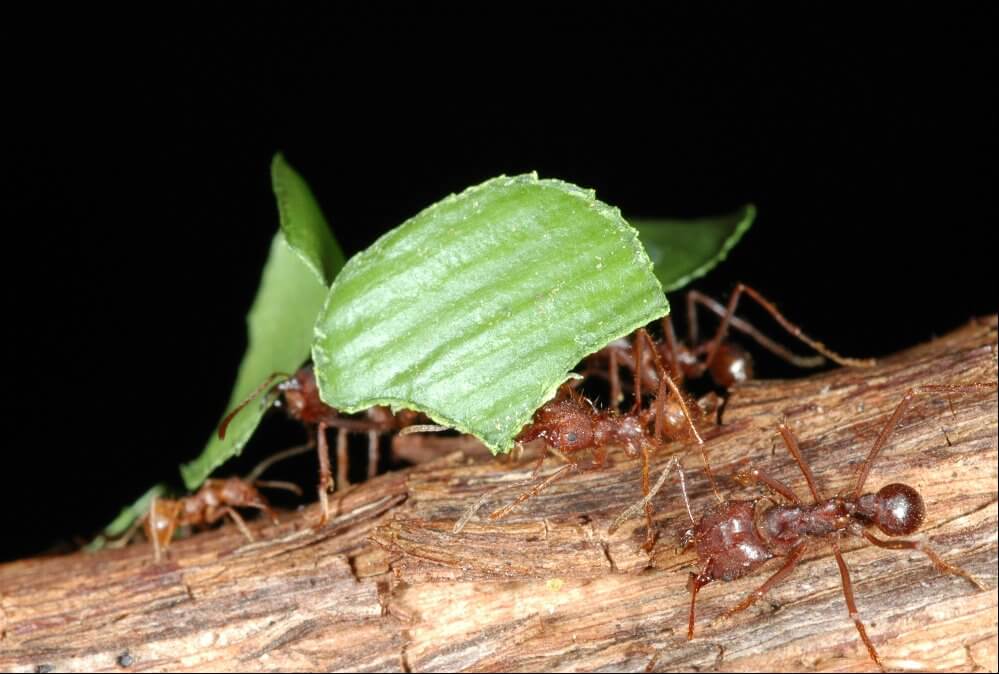 Army/leafcutter ants (like these Atta mexicana) are common in the jungles of west Mexico. Photo: Wikipedia CC by 2.0

Where there are army ants, interesting birds are sure to be found.

Birds of tropical forests know that when army ants are on the hunt, otherwise-cryptic insects flee from their hiding spots as the surging antswarm advances, making them easy fare.  However, this was a first for me, to see an ani at an antswarm.  Smart birds, I guess. Soon, I spot more anis…eight in total.  Surely there must be some other, more interesting birds around?  Not that anis in the forest aren’t interesting, but you know what I mean.  There are no antbirds in western Mexico, so what else could be lurking around the edges of this feeding frenzy?  Soon I spot the bird I most associate with army ants in northern Mexico…a Fan-tailed Warbler, its white eyespots glowing in the darkness, revealing its identity.  But as quickly as it appears it is gone, into the darkness.  Standing still is apparently not a good idea in the middle of an army ant swarm. 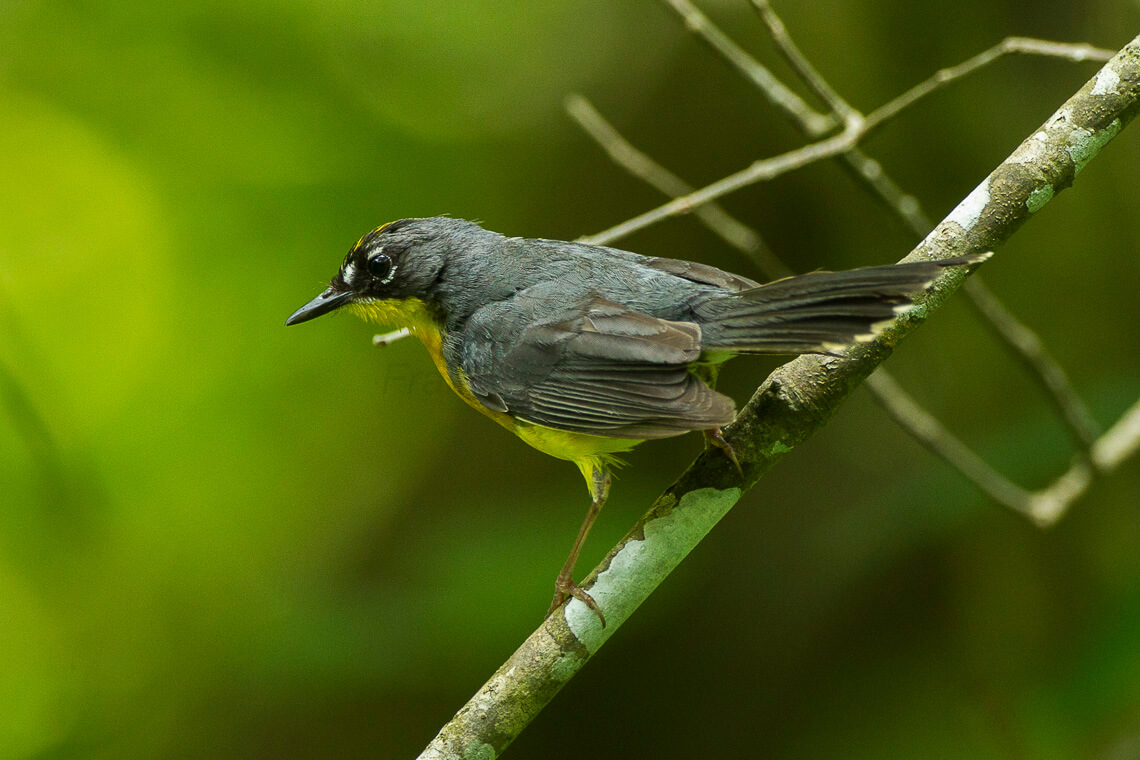 So concludes another amazing day of birding

Although it was a quick and fleeting glimpse, we turn to head home, satisfied with the diverse array of birds seen, and satisfied knowing that this forest, preserved by the owners of a polo club at the edge of San Pancho, Nayarit, still harbors such important biodiversity like army ants, fan-tailed warblers, and countless other resident, endemic and migratory birds, from Pygmy-owls to parakeets and Painted Buntings. Day 3 of our Western Mexico Conservation Birding Tour draws to a close. Now it’s time for dinner and drinks, and to put our toes in the sand and listen to the waves crash on the beach, as we enjoy the fine company of our group, reflect on the day, and dream about what lies ahead. 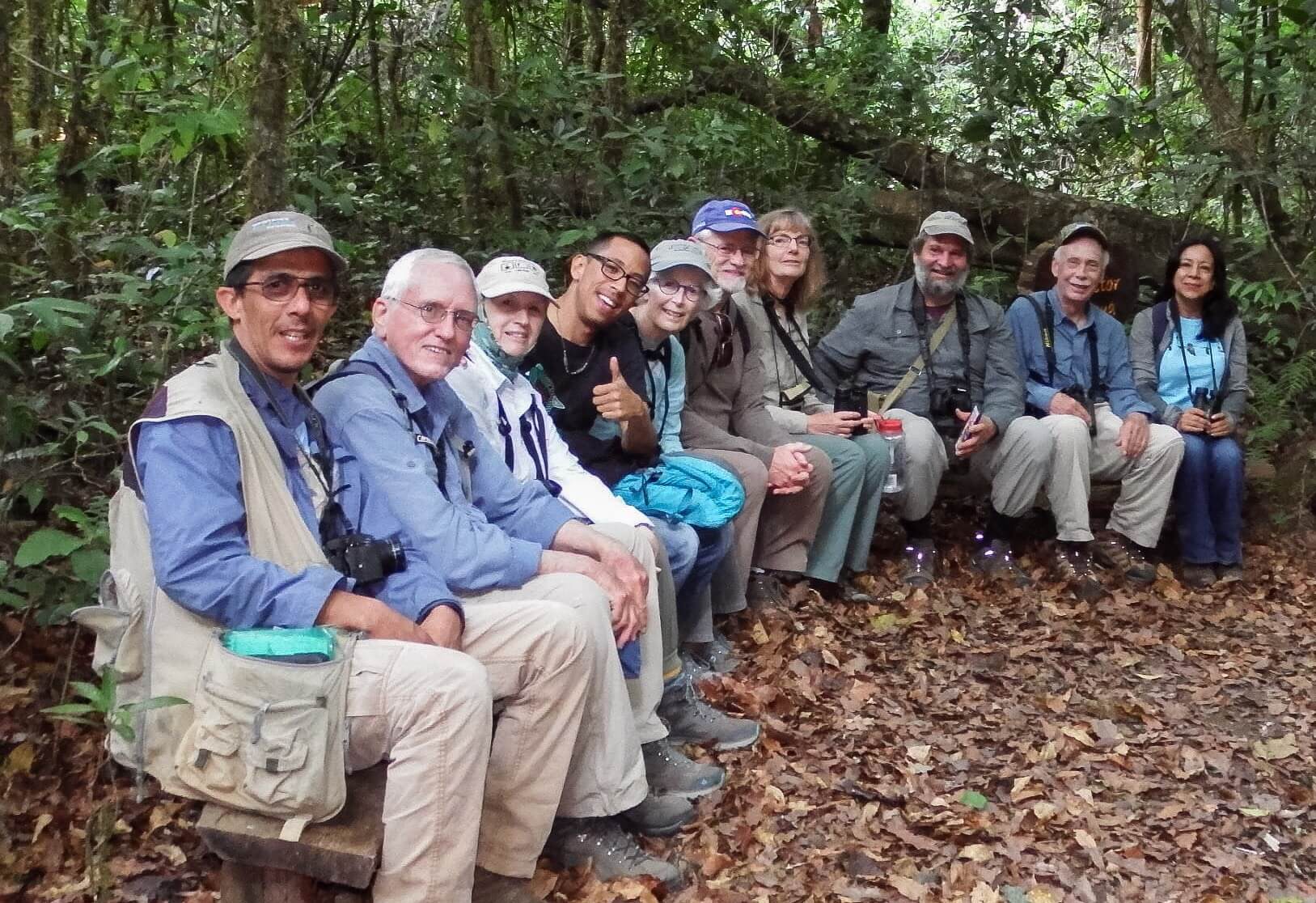 Conservation birding: experiences of a lifetime

In late March of 2019, seven intrepid travelers from Colorado joined me and two of our conservation partners, Sarahy Contreras from the University of Guadalajara and Luis Morales from San Pancho Bird Observatory for an 8-day conservation birding tour of western Mexico. Bird Conservancy of the Rockies has run these trips since the 1990s as a way to increase awareness and appreciation for this important area for migratory and resident birds, build connections between people and places, learn about efforts underway to protect the environment here, and help support local conservation programs. Western Mexico is the epicenter of avian endemism in Mesoamerica, and ground zero for western forest migrants from North America. 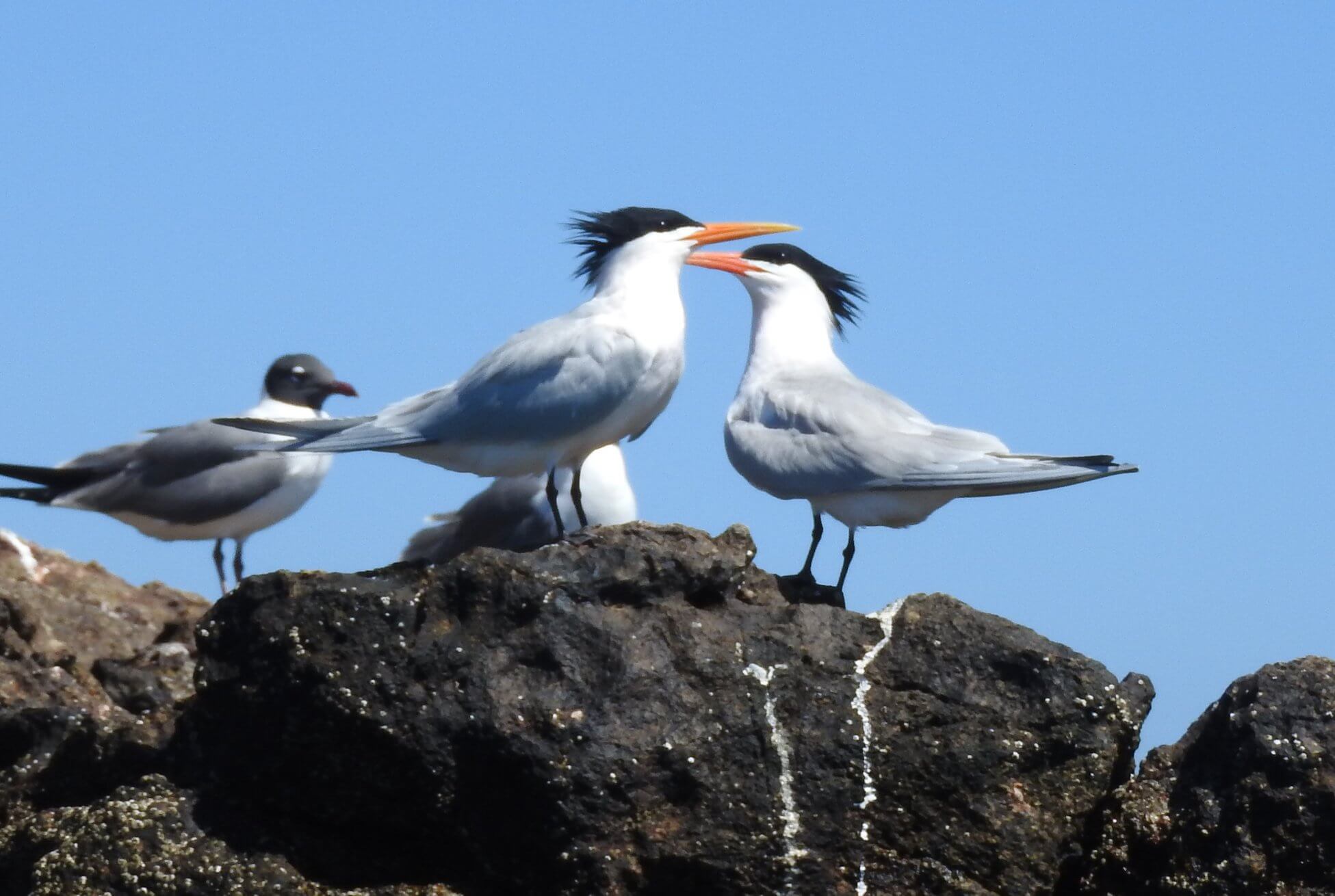 Blue-footed Boobies and a Heerman’s Gull on the Islas Marietas off the coast of Nayarit, Mexico. Photo: Arvind Panjabi

We started our journey birding off the beaten path in the tropical forests and coastal areas around San Francisco (aka San Pancho), Nayarit, where birdlife abounds. We visited several ejidos (communal lands) and private nature reserves, in turn helping to support the nascent green economy there, and even visited some offshore islands where thousands of Elegant Terns, Brown and Blue-footed Boobies, and Brown Pelicans were nesting, and a lone Peregrine Falcon hunted from the cliffs. We then headed up into the mountains of neighboring Jalisco, through heavily wooded foothills teeming with birdlife. A brief roadside stop along a crystal-clear river found us immersed in our own river of birds: Yellow Grosbeaks, Scrub Euphonias, Painted, Varied and Blue Buntings, Streak-backed and Bullock’s Orioles, a Plain-capped Starthroat, a troop of Black-throated Magpie Jays, Green Jays, Rufous-capped Warblers and many other birds streaming by. The longer we stood there, the more we saw!

A Ferruginous Pygmy-Owl at a private nature reserve outside of San Pancho, Nayarit reacts to our tooting. Photo: Arvind Panjabi 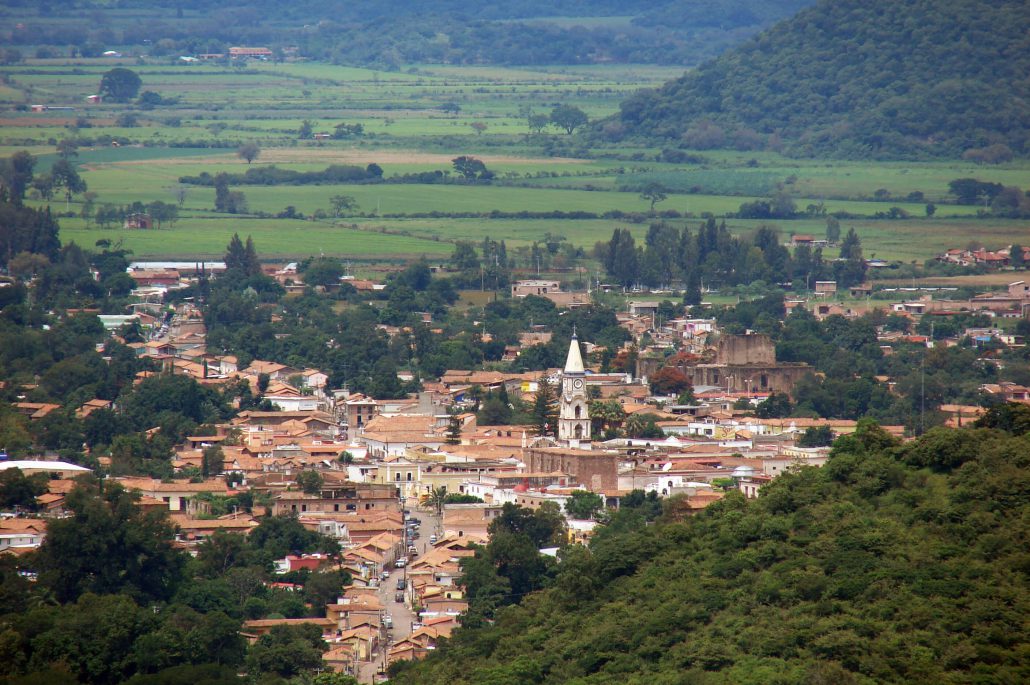 It was hard to pull ourselves away, but we still had several hours to drive to get to our destination.  Back on the road, the lush foothills soon gave way to drier intermountain basins with thorn forests and fields of blue agave. We stopped to learn about the traditional method for producing tequila (all the tequila in the world is produced exclusively in Jalisco) and, naturally, sample some of the product. Later, we enjoyed a traditional comida in the town of Mascota, a pueblo magico that takes you back in time with its Spanish colonial architecture, central plaza and scenic natural surroundings. A late afternoon stop in the open country outside of Autlan de Navarro, our base of operations for this part of the trip, felt closer to home with familiar birds like Cassin’s kingbirds, Loggerhead Shrikes, Black-headed Grosbeaks, and other birds of oak woodlands.

Autlan de Navarro, nestled between the Sierra La Cacoma and the Sierra de Manantlan, is not on the list of places most birders visit in this region, but it probably should be with its easy access to many low- and high-elevation habitats. After a morning birding along an altitudinal gradient in the seldom-visited Sierra La Cacoma, where we found some very cooperative Banded Quail, we headed up to the Las Joyas Research Station in the Sierra de Manantlán Biosphere Reserve for three days of R&R deep in the forest, where few foreigners ever go.

Here, in addition to some of the world’s finest “wake-up, crawl-out-of-bed, and watch-the-birds-come-to-you” sort of birding, we were treated to bird banding by University of Guadalajara students and faculty. Las Joyas is home to Mexico’s longest-running bird monitoring program, and over two mornings, trip-goers were able to ogle and release nearly 100 birds of more than 30 species, including specialties such as Bumblebee Hummingbird, Blue Mockingbird and Colima Warbler. We also enjoyed excellent views of mythical birds such as the Chestnut-sided Shrike-Vireo and Aztec Thrush, the latter of which vocalized so frequently we became quite familiar with its thrush-like sounds. 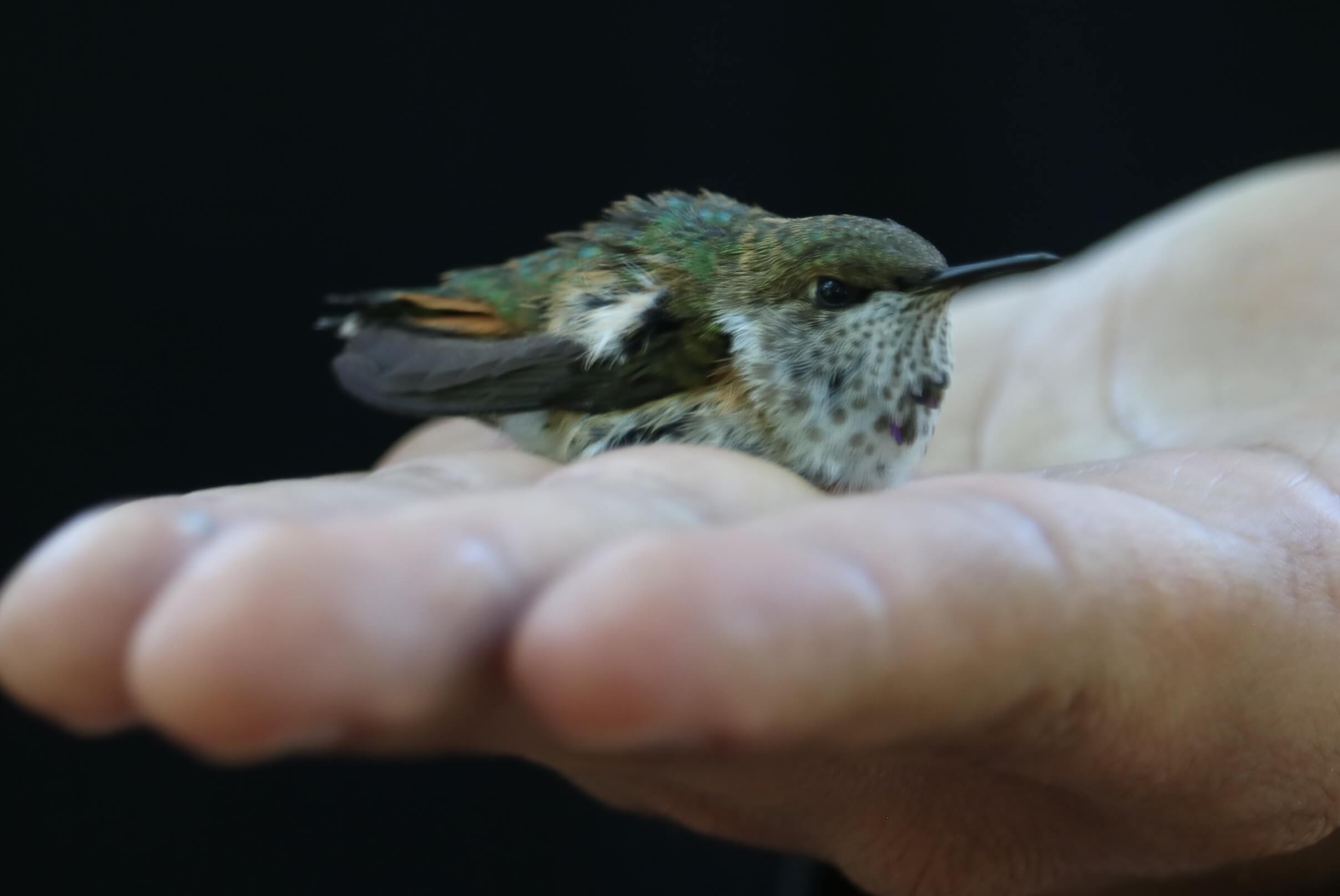 Bumblebee Hummingbird in the hand at the banding research station. Photo: Arvind Panjabi

Into the Mexican Highlands

Our last stop before heading for the airport in Guadalajara was in the open country of the Mexican highlands, where our recent experience with novel resident and endemic species was juxtaposed with more familiar species. These included Eastern Bluebirds, Curve-billed Thrashers, Bushtits and Bewick’s Wrens (with some White-faced Ibis, White-tailed Hawks, and White-tailed Kites thrown in for good measure). It was here that⁠—at least for me⁠—I came to realize that we are really all just one continent of birds and people: one America. Mexico is just the southerly extension of the USA, and vice-a-versa, and the birds we share are all part of the same avifauna. While some species are widespread, many are locally restricted, and others migrate from one end to the other. Yet, they all depend on the same landscape we share, and the decisions that we make. 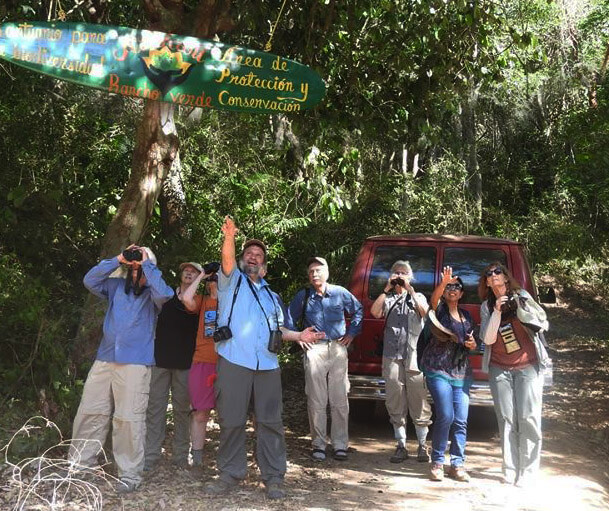 Bird Conservancy of the Rockies and our Mexican partners are eternally grateful to the seven adventurous travelers who took a chance and came with us to see Mexico how we see it. This support and participation are vital to our collective efforts to conserve birds and their habitats in this continentally-important corner of America.