Promising News for the Aplomado Falcons of the Chihuahuan Desert Aplomado Falcons (Falco femoralis) once ranged across the northern reaches of the Chihuahuan Desert in Arizona, New Mexico and Texas, as well as in the Tamaulipan shrub-lands of coastal Texas.  This population vanished by the 1930’s, with agricultural expansion and degradation of grasslands as the suspected causes.  In the 1990’s a population of Aplomados were discovered in the Valles Centrales (“Central Valleys”) grasslands of central Chihuahua, Mexico.

The Valles Centrales, located midway between El Paso, TX and Chihuahua City, is the largest Grassland Priority Conservation Area (GPCA) in the Chihuahuan Desert.  These grasslands are home to the  endangered Mexican population of pronghorn  as well as for a large suite of declining grassland birds; providing critical habitat for up to 50% of all Baird’s Sparrows and Chestnut-collared Longspurs and up to 25% of all Sprague’s Pipits wintering in the desert each year.

However, hundreds of thousands of acres of these high quality valley-bottom grasslands have been destroyed by a revolution of agricultural modernization and expansion that started in 2004.  Sixty-three percent of the valley bottoms in the Valles Centrales GPCA are now occupied by agricultural fields whose long-term sustainability is doubtful given  the over-exploitation of local aquifers. 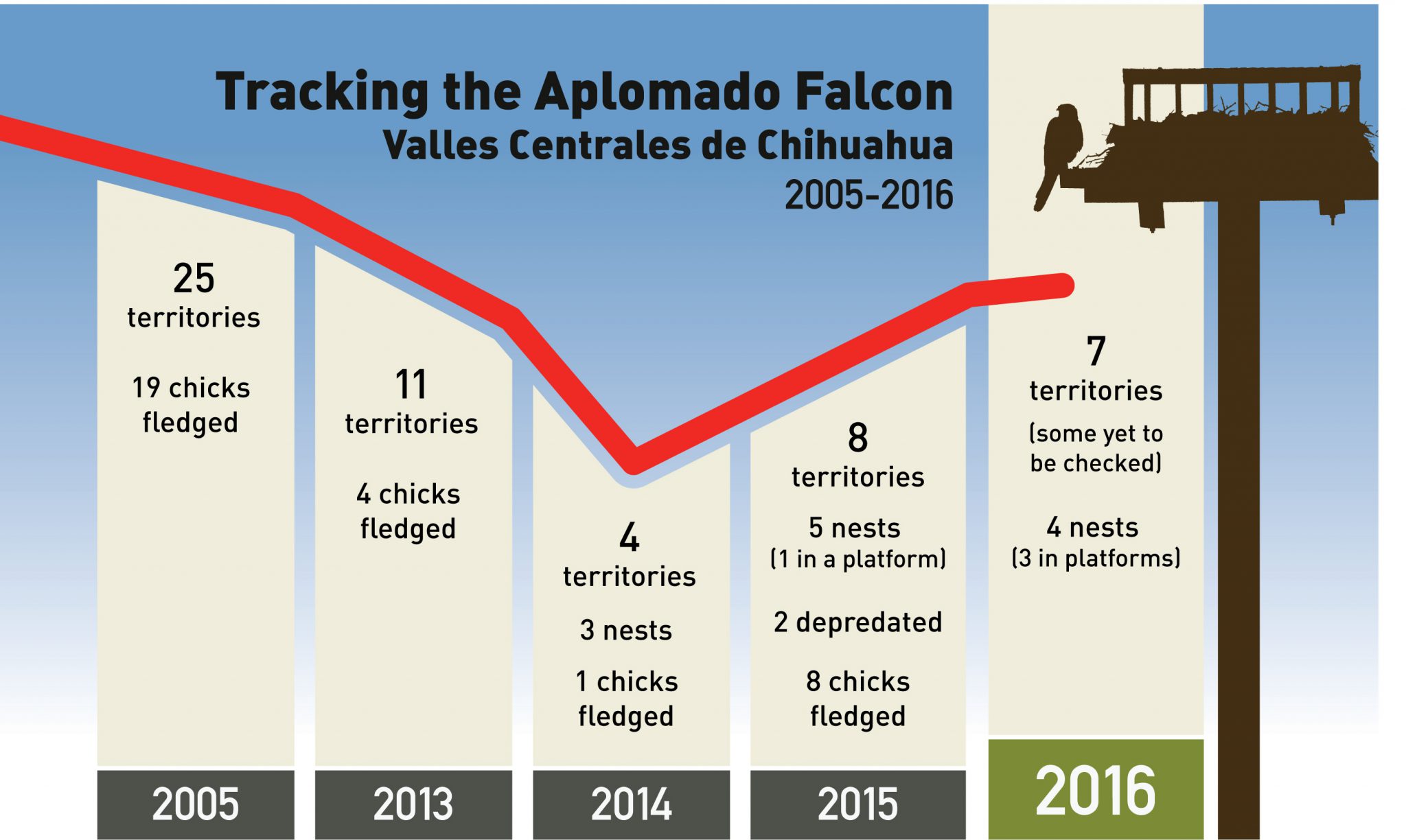 Lack of adequate prey and nesting sites and depredation by Great Horned Owls and ravens have been identified as the primary causes of low reproductive rates, as well as mortality from drowning in stock tanks.  Our partnership is working to improve habitat to support prey populations, to mitigate risks from water tanks and to provide adequate nesting sites that protect the falcons from predators.

Since 2013, we have erected 43 nesting platforms and 94 stock tank ladders in current, historic and potential Aplomado territories.  Fortunately, these efforts seem to be paying off.  This year IMC – VS reports that of the five nests this year, three pairs usednesting platforms we installed. The barred entrances of these platforms protect falcon nestlings from Great Horned Owl depredation, a major cause of nest failure. More platforms and ladders are needed, the latter of which benefit many raptors, other birds and a variety of thirsty mammals prone to falling into deep water storage tanks.  We have hope that the increased use of these artificial nesting sites marks the beginning of a turn in the falcon’s fortunes. 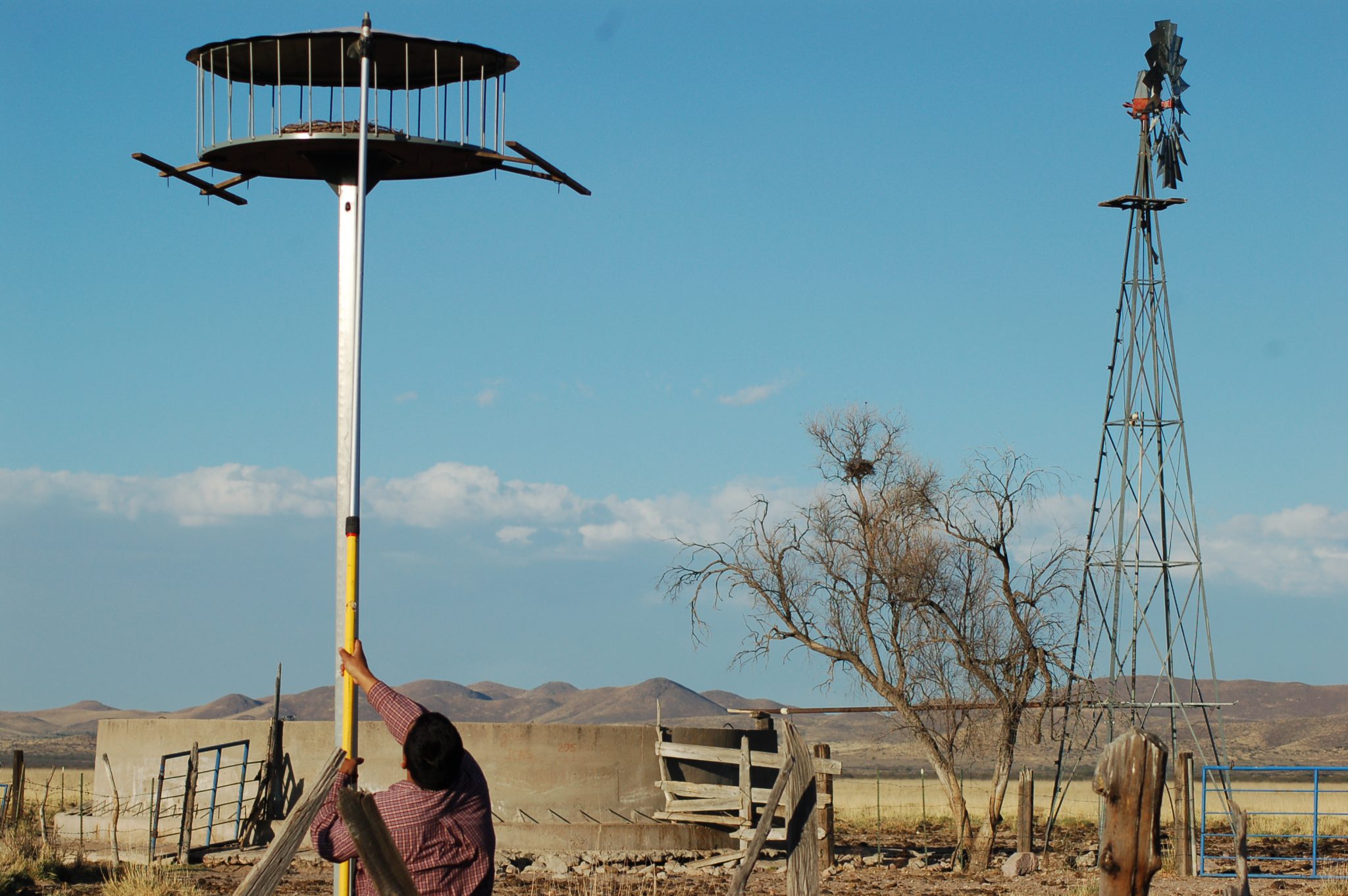 To improve habitat for declining migratory grassland birds, which are the Aplomado’s prey base, we are working on the ground in Mexico with IMC – VS and other partners.  This partnership directly supports landowners searching for additional financial resources to initiate projects that maintain and improve grasslands. These relationships with private landowners are backed by 15 year collaborative agreements and guided by jointly developed management plans that transition ranches to rotational grazing systems.  Such changes require redistributing water lines, adding water storage capacity and adding or modifying fences, at great cost. Our ranch-level monitoring of grassland bird communities and habitat conditions informs adjustments to land management and quantifies the effects of our conservation efforts on bird populations. Our goal has been to support five successful breeding pairs of Aplomado Falcons and enroll 500,000 acres by 2020.  We are well on our way there.

These efforts are the key to balancing rancher livelihood, sustainable cattle production and conservation of the grassland ecosystem. These actions benefit not only Aplomado Falcons, but all migratory grassland birds, whose populations are declining faster than any other group of birds in North America.