A pastime presents a lens into the future

It was a brisk spring morning on the Front Range of Colorado. The sun had not yet risen and would not for quite some time. Muffled footsteps were heard across the cold hardwoods, while little boys and girls were awakened with a shake. With tired eyes and argumentative cries they reluctantly put on their boots, and ate their breakfasts. These kids, these conservationists and the future of what we hold dear, had vague understandings of what they were about to embark upon.

We set forth on our mission for the day without any ideas of certainty, but the hopes of the youth were riding high on our desires to produce. This day was about building for the future. For the future of our families, our wild places and in a sense, our society as a whole. With that in mind; the kids were fastened into their seat belts for an experience that would shape their lives. 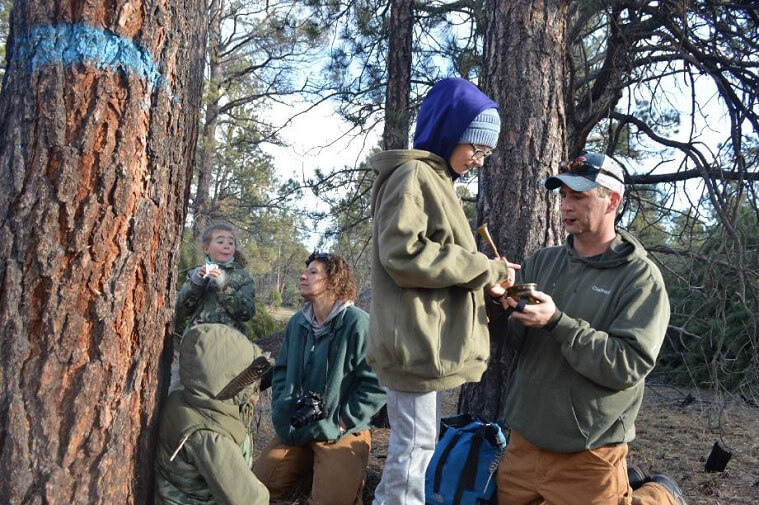 The breeze was soft, but the air was crisp as we set out from the vehicles. Two families embarking together with the hopes of observing one of the greatest spectacles of the wild spring. It wasn’t long after we entered the woods that the clues of the birds’ presence began to present themselves. Tracks, feathers, scat and roost trees were all interesting topics of investigation as we hiked through the old yellow bellied Ponderosa Pines. The thick orange bark of the aged Ponderosas presented itself in a way that spoke of the days of past, of mysteries unseen by the human eye and wisdom beyond our comprehension. With every step forward it was apparent there was a sense of excitement and curiosity in the children.

Before long we arrived at our destination for our first set; a recently cleared area where trees had been harvested to restore the forest to its former self, a restoration of an evolutionary environment under which the inhabitants had evolved to live. The restoration of the Ponderosa Pine woodland was the result of a partnership between Stewardship Biologists from Bird Conservancy of the Rockies and the private landowners. Outcomes of which seek to mutually benefit all species of wildlife while aiding to continue the proud heritage of ranching which sustains this place. 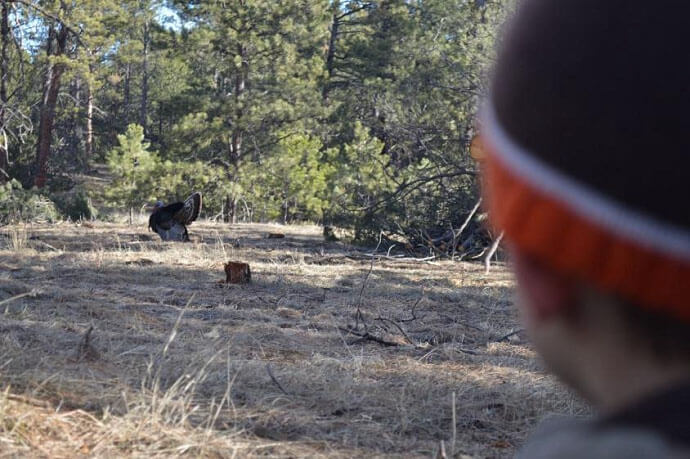 Young Jackson focuses on a nearby strutting tom.

A soft purr rang out from the box call, followed by a yelp. All sounds created to provide the impression a mate is near. We sat quietly, as still as possible, since the male turkey is quite elusive. Then we heard him: the muffled gobble of the wild tom turkey. It wasn’t long before this dinosaur of the modern age was upon us, following the sound of what he thought to be a receptive hen. The excitement of the kids (and adults) was electric! The tom came to a stop and then began the show. In full strut, he fanned his tail feathers, drug his wings and danced for what he thought was a mate. This went on for a few minutes with corresponding gobbles. The tom, however, was not satisfied with remaining on the other side of the log pile from his potential partner. He ventured around the obstacle and to within mere yards of the ecstatic on-lookers, all the while performing the spring ritual which we had hoped to see.

The day carried on in much this same fashion, with many more encounters and spectacles. The kids thoroughly enjoyed seeing the birds in their habits and habitats. Wonder and excitement ensued as they called to the birds themselves with pots and boxes and elicited that timeless reaction of gobbling and strutting.  It’s a story of getting kids outside and immersing them in the wild, sparking insights that shape young minds. These types of outings are what will lead to future conservationists with the passion it takes to continue such traditions. 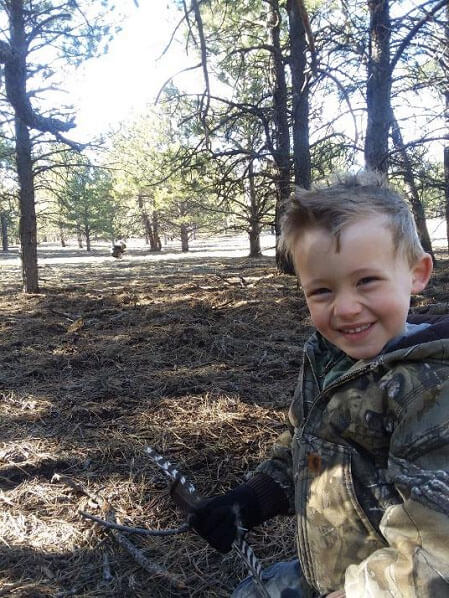 Big smiles, a tom strutting in the background and a handful of memories. Mission accomplished.

The kids in this story learned not only of the turkey, but of a larger community of wildlife. They gained not only the physical skills of woodsmanship, but also the emotional and immersive experience of becoming one with nature. They are members of an ever-exclusive minority of Americans who will connect with wildlife and nature on such terms. Participation in outdoor recreation pastimes like hunting and fishing are on the decline in the U.S. Only about 5 percent of Americans 16 years old and older actively hunt, roughly half of what it was 50 years ago—and the decline is expected to accelerate over the next decade. 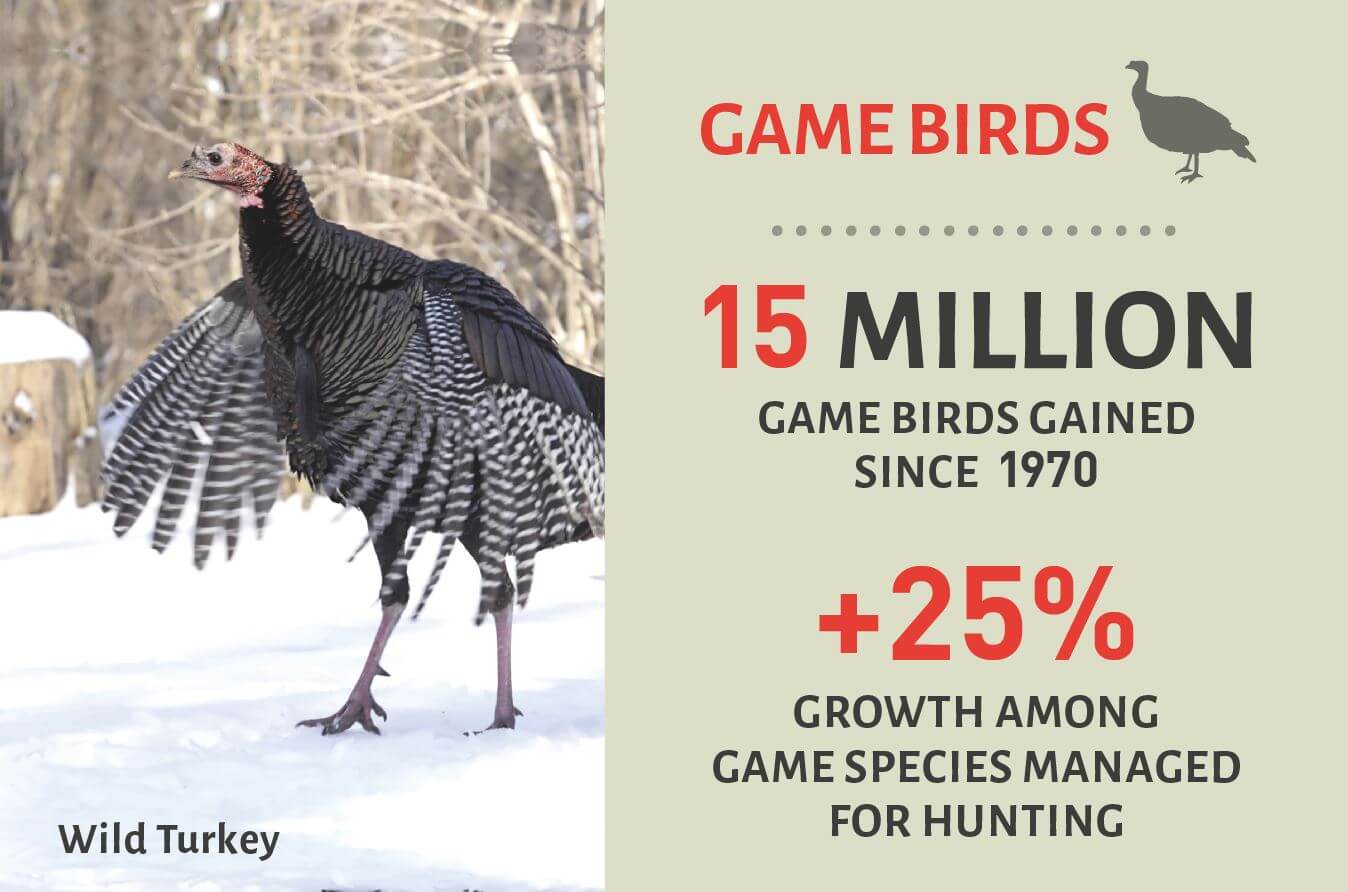 Fewer people hunting poses a problem since state wildlife management budgets rely heavily on these activities. Funds generated from license fees and excise taxes on the purchase of guns, ammunition and angling equipment provide about 60 percent of the funding for state wildlife agencies. Conservation efforts spearheaded by hunting groups have restored millions of acres of habitat across the country. These gains have resulted in overall increases in populations among waterfowl (up 56% since 1970) and game species. It shows how conservation efforts can yield big gains, including indirect benefits for non-game species, which is critical at this time when researchers estimate an overall loss of 3 billion birds in the last 30 years.

Unfortunately, despite overall gains, Wild Turkey are showing signs of declining populations in recent years. Conservationists and wildlife managers are working to understand the exact causes, but habitat loss and quality of existing habitat are likely involved. This ‘conservation success’ story is still being written.

Ty Woodward is employed by Bird Conservancy of the Rockies with funding support from NRCS and Colorado Parks & Wildlife.